Is weed legal in California?

Proposition 64, or The Adult Use of Marijuana Act, was passed by California voters on November 8, 2016. Sales, possession, cultivation and consumption were legalized for recreational (non-medical) use for anyone 21 years or older and sales and cultivation taxes were established.

The Medicinal and Adult Use Cannabis Regulation and Safety Act (MAUCRSA) was passed in 2017 and went into effect January 1, 2018. It addressed some of the confusion caused by the passing of Proposition 64 by easing licensing requirements and further explaining medical marijuana rules. MAUCRSA also assigned oversight of the industry to three agencies including the Bureau of Cannabis Control for oversight and licensing, Department of Food and Agriculture for cultivators and seed-to-sale tracking, and the Department of Health for manufacturing.

Where can I buy?

California marijuana purchases will include appx. 25% to 45% net effective tax depending on the city and whether the purchase is medicinal or recreational. Taxes included are: excise, retail sales, cultivation, as well as a city tax that is determined and applied by Local governments. Tax revenue collected is used to fund new law enforcement projects, pay for the costs of running the program including research and education.

Where can I consume?

Consumption of any marijuana product is only allowed in a private area. Businesses that hold a commercial cannabis consumption license such as an event company and retail dispensaries with city approved consumption lounges are allow you to consume onsite.

Do not operate any vehicle or bicycle while under the influence of thc or sit in a car while in possession of an open marijuana container. Both are illegal. Consumption in a vehicle is prohibited at all times for both the driver and any/all passengers.

In California, adults 21 or older can purchase and possess 28.35 grams (1 ounce) of dry marijuana flower and up to 8 grams of marijuana concentrates.

Medical marijuana patients and caregivers are allowed to possess and transport up to 226.8 grams (Half pound) of dry marijuana flower or marijuana concentrates.

28.35 grams (1 ounce) of dry marijuana flower or 8 grams of marijuana concentrates can be given or “transferred” between adults 21 and older. Medical marijuana should never be transferred or given away.

How old to consume?

The Medical Marijuana Identification Card Program (MMICP) was set up by the California Department of Public Health to create a universal state-authorized ID card (sometimes referred to as a “County Card”). To verify patients and their primary caregivers, a statewide medical marijuana registry was also created. ID cards are good for one year and are applied for in person by the patient for themselves or for their primary caregivers. Patients are required to pay the County’s program fees before receiving their card. Fee’s range from $50-$200 annually depending on the county.

An MMICP card is not required to buy legal recreational or even legal medical marijuana in California but it provides you with a rock solid reason to possess more product or grow more plants than the legal recreational amount the state says is ok.

The following medical conditions have been listed on the California Health and Safety code as qualifying for a medical marijuana card:

California law allows anyone, from anywhere, 21 years or older to buy marijuana for recreational use.

You must be a resident of California to purchase medical marijuana.

All marijuana products harvested and produced for commercial, medical, and adult use must be tested by a state licensed marijuana testing lab as mandated by the Bureau of Cannabis Control.

All cannabis products must be tested for:

Marijuana business licenses are applied for and approved or denied online at the BCC website. All of the necessary forms are available for each type of license.

Every Thursday we send out a list of reviews that have caught our eye. We try and make it as easy as possible for you to find the best of the best. It’s like having a personal budtender in your back pocket. 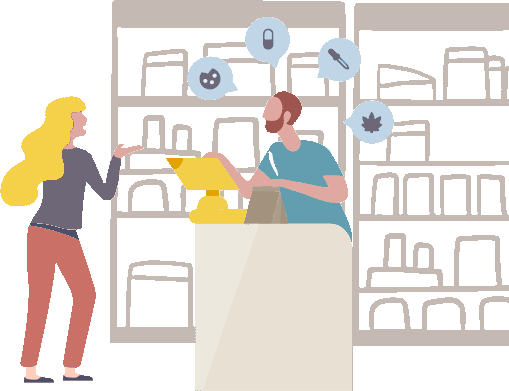 NUGGETRY is a free to use platform that connects marijuana consumers and businesses.

WHAT'S ON FIRE THIS WEEK